Well here it is. The last throwback. I had wanted to put together a mix of all (or most) of the tracks that I had “thrown back” over the last year, but I’m out of town and the hotel wifi is so brutally slow that it probably would have taken 12 hours just to download the tracks to my laptop. I’ll save this for another day.
Instead I’ve summoned my inner nerd (the same as my outer nerd, but slightly nerdier) to perform some data entry and mining. Here is a breakdown of throwbacks by genre: 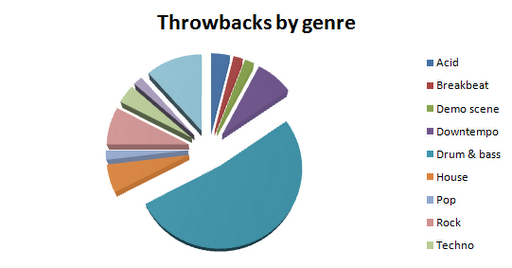 Here’s the same thing in a word cloud:

Overall I think this is pretty indicative of where my musical interests lie, or at least did if you were to take a cross-section of what I listened to up until 2007 (the youngest throwback), with some bias towards to the latter part of this period.
Notable exceptions include metal and punk. While I did listen to these in my youth, they never really stuck with me, so I guess I felt less inclined to throw them back.
Other interesting but ultimately useless statistics:

So there you have it. If this whole exercise serves no other purpose at least Google now knows what kind of music I like (as if they didn’t already). You’re welcome, internet…

Happy December folks (though you wouldn’t know it if you’re on the East Coast – the mercury was well above zero today).

I spent the day in Centre-of-nowhere-ville again and was listening to techno and house pretty much the whole way there and back. It’s been a while since I had a good listening session and it totally jogged my memory about one of my – if not my all-time – favourite deep house tracks.

When I first discovered this track I went overboard and “over”-listened to it, hence why I had totally forgotten about it until now, but I think I’m ready to start including it in my semi-regular rotation once again!

I would go so far as to call this a masterpiece of deep house. It’s masterfully arranged and has pretty much everything I want to hear in a deep house track: a funky bassline, lots of space and texture, subtle rhythms, smooth transitions and a gradual build up to an excellent hook.

For me it’s right up there with one of my other all-time favourites, “Deep Breath” by Nick Curly c. 2007 (perhaps a bit too new to throw-back, however).

P.S. next week is the last official throwback. I hope to prepare something special, time permitting, although I just found out I’m going to be in Tennessee for the better part of the week! Fingers crossed I can find the time.

This week’s throwback goes out to my Mario Kart crew – the many adversaries I’ve faced off with in the original SNES Mario Kart battle mode since it was released in 1992. Just off the top of my head: Chris P, Mike P, Jordan L, Anne B, Amanda, Keri, Sasha L, Denis T, Bruno C, James B, Jamie R, James S, and many more I’m sure I’m forgetting. Wherever you are, whatever you’re doing: keep on kartin’, yo!

I have no idea how many hours I’ve listened to this track. It’s gotta be in the hundreds. The great thing about the original Mario Kart soundtrack is that synth bass sample… bow bow buh-buh-buh bow… that never gets old!

And now for a sad announcement: December 9th marks the the 1 year anniversary of Thursday Throwback. It will also mark the last.

I originally started doing this as a promotional tool to increase readership on my blog and ultimately get the word out about my music. From that perspective it’s been largely unsuccessful. Perhaps I’ve not been doing enough to promote it – I am often guilty of that.

Regardless, I’ve enjoyed chronicling the music of my past and will continue to post old tracks as they pop into my head, just not necessarily on Thursdays.

When I was in grade 4 or 5 I wrote a rap song about being abducted by aliens. I guess you could say it was the first song I ever wrote. There was no music per se, only a drum beat and a little spaceship-esque sound, both courtesy of my Yamaha PSS-280. Unfortunately I can’t remember the last little bit so you’ll just have to make something up on the fly.

I really wanted to make a music video for this but it never materialized – I simply can’t imagine the amount of success and fame I would have seen if it had!

Young me, approx 1990 (imagine spaceship sounds wherever you see “…”):

I was walking one day, to get to the mall
When I looked up in the sky and saw something small
It came down low and it began to grow
And to my surprise it was a U.F.O.
U… F… O…

That night when it was all over
I went to my friend’s for a sleep-over
I saw it again that very night
It was so bright, I almost lost my sight
U… F… O…

If you come up with something clever for the end do let me know.

Going to explore some new territory this week with a TV throwback. If you don’t know this one you must have been in hibernation between the years of 1988 and 1995, when this theme song was on the air. (The show itself is still on but they’ve changed the theme. Blasphemy!)

As far as creepy theme songs this one destroys them all, hands down. I mean this makes the X-Files theme sound like a leisurely stroll with a loved one on a brisk Fall evening. It makes the Tales The Crypt theme sound like some kind of crazy, but enjoyable, medieval circus.

As a musical piece I think this thing is just brilliant. Sure the sounds may be dated but if you can look at past that I’m sure you’ll agree. I imagine this is the sort of things zombies would play if they threw parties (… who says they don’t?)

To be honest I had completely forgotten about this tune until just last week. I was working on an arrangement with Mr. James Spray of The WAX and he was describing this sound that went “waaaanh eeennh”, and I was like “that’s so totally the sound in the Unsolved Mysteries theme song!” (and also the sound my cat just made at me)

Late throwback today and therefore a quick one. Spent the day in Centreville for work (or as I affectionately call it, Centre-of-nowhere-ville) and heading to the Valley tomorrow with my wife. Between now and then I need to bounce some stems for The WAX record, send some work e-mails, buy and mail a gift, mail another gift, do laundry, pack, and probably 7 other things that I’ve forgotten.

As such I figured it would behoove me to post something to help calm my nerves. So here’s a tune off of Alaska’s “Arctic Foundations” album – one out of the stand-outs for me, next to Halcyon 4.1. Love the little guitar-esque sounds, the way the bass drops in effortlessly and of course the little drum work about 3/4 of the way through.

Halloween is coming up and I couldn’t think of a more fitting tune to post than this one. You gotta love the the creepy ambience and freaky noises throughout. You can tell these guys were all about experimentation when they were writing this track.

I still have my copy of this LP and it’s one of a few LPs that I’d definitely hold on to even if I were to sell my record collection. My favourite tune off the LP is probably Resurrection feat. Ryme Tyme, which also has a bit of a creepy vibe (“the mind creepers, the soul seekers”), and FYI mixes perfectly into the Konflict remix of Karl K – Synapse 😉

I’m playing a Beardsley (live techno) set tonight so of course that means a dirty synthy techno throwback! This one bring me all the way back to 1999, and a now infamous venue just outside of Gatineau/Hull – Auberge des Rapides was the name if I’m not mistaken.

UK DJ Chris Liberator, one of the founders of the classic techno label Stay Up Forever, was headlining a two room party there. I remember walking upstairs at the peak of the party right in the middle of the breakdown. Hearing this massive track on a massive system is an experience on its own, but hearing it at peak time with everyone flipping out just takes it the next level. This is definitely one of a few rave memories that will remain vividly etched in my mind, and one that inspired me to put on shows, produce, DJ/perform, etc.

This Saturday is Extra Life, the 24 hour gaming marathon for Children’s Miracle Network, so it seemed only fitting to post a video game throwback. (Please consider donating – it’s for a good cause!)

As I’ve been playing mostly creepy/darker games lately I felt compelled to dig up this classic from Super Metroid. Metroid Prime 2 featured a remix of this tune but I find the instrumentation in the original a little bit better, despite having that typical “tracker music” sound I associate with SNES games.

Okay, now I’m off to play with the copy of Donkey Kong 64 I just scored!

Quick throwback today as I get ready to hit the road with The WAX for a show in Charlottetown tonight.

This week’s throwback, surprisingly, is the first track I’ve posted by Teebee. I’d definitely rank him towards the top as far as influential and versatile drum & bass producers go.

Here’s something that sits right in the middle, which seems to be his sweet spot.